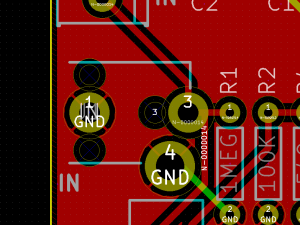 Here’s a workaround I used in a KiCad layout that involved a DRC error with a module’s (non-conducting) mounting pin. The mounting pin is physically close enough to an electrical pin that it makes the DRC clearance test fail. The proximity isn’t actually a problem because the offending pin is just so much mounting foo for the part, but KiCad doesn’t know the difference.

The workaround is to edit the pad for the mounting pin and assign it the same pad number as the pad the DRC thinks it’s too close to. (See the two pads numbered 3 in the above image). Kludgey, but it silences the (not really an) error. I made this change in the PCB layout rather than in the library module as it won’t be a problem on boards with smaller copper clearance.

BTW, the module is for a Keystone 970 RCA jack and is available in my Bitbucket repo.