The pointer is a concept found in many programming languages. Pointers in C++ are especially important because in C++ there is a close relationship between pointers and arrays, C strings, and references. Thoroughly understanding pointers will give the programmer amazing superpowers and rockstar incredibleness.

Address of a variable

Before we go any further, you will want to remember that each variable in a program is stored in a particular location in computer memory and that these locations are identified internally using memory addresses. Depending on the size of the variable, the location may occupy a block from one to several bytes. The base address of a variable is the memory address corresponding to the starting point of this block.

You can think of a pointer variable as a variable that stores the base address of some other variable.

For the moment, let's not consider why you would ever want to do such a thing. It turns out there are lots of cool things you can do with pointers, but you'll just have to trust me on this. Right now, let's just try to get our heads around the concept a little better.

There are two ways you can think about pointers. The first way relates pointers to what is going on vis-a-vis the computer’s hardware. The second is more abstract, visual, and high-level. Both ways have their advantages. Usually, an individual programmer becomes more comfortable using one or the other; however, understanding both will be necessary no matter which model you prefer.

Pointers in relation to computer hardware

If we were now to ask what the address of count is (which we will learn how to do shortly), the system would tell us count is located at its base address—58000 in this case.2)

So, now let's say that (for whatever reason) we wanted to create a variable to store the address where count is located. That variable is what we would call a pointer, because it “points to” a block of memory. Extending the example above, let's say that we create a pointer variable named countPtr and set it to point to the int that is count. Furthermore, let's say that pointer variables on our system are stored in 8 byte (i.e., 64 bit) units, and that when we run the program the operating system places countPtr at an 8-byte block starting at 64002. That would yield something that looks like:

Note that while count occupies a total of four bytes of memory (bytes 58000 to 58003), countPtr stores only the address of the first byte of count.

Pointers in the abstract

In the abstract, visual, high-level model of pointers, we can think of them as graphically pointing to other memory locations. For example, given the count variable used above:

the countPtr pointer variable above would be represented as:

In this diagram, the value of the pointer countPtr is the box the arrow points to (i.e., the integer count). 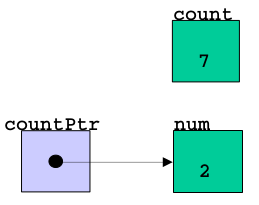 In C++, the * character is used to indicate pointer variables in declarations and function parameter lists. The code fragment below creates a pointer variable named myPtr that can point to a block of memory that stores an int:

The location of the * character is flexible: it can be placed before the name of the pointer (as in the above example), immediately after the type, or separated from both the type and the name by whitespace. All the declarations below are equivalent:

You can declare more than one pointer variable at a time:

But be careful: the following actually creates one pointer and one int:

Pointers can be created to point to any type:

To set the value of a pointer, you need the address of something. C++ has an address operator, &, that returns the base address of a variable:

Most environments show base addresses as hexadecimal numbers by default.

The example below declares an integer variable y that is initialized to 5 and a pointer variable to an int named myPtr that is set to store the address of (i.e., “point to”) y.

The result of this code fragment may be diagrammed as follows: 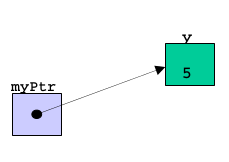 and when run may generate the following memory map:

You can change the value of pointer variables (that's why it's called a variable!):

Pointer variables can be initialized when declared. It is good programming practice to always initialize pointers so they do not accidentally point to unknown memory locations. The code below initializes the value of the pointer variable in the declaration:

You can set a pointer to a special value that indicates that it is pointing to nothing. This special value has the name nullptr (C++11) or NULL.

If the memory location that a pointer variable will point to isn’t known at the time it is declared, then you should initialize it to nullptr or NULL. This will prevent the pointer from accidentally pointing to arbitrary memory locations.

Below is an example of initializing a pointer variable to NULL when declaring it.

Note how yourPtr is initialized to nullptr even though we change the pointer immediately afterwards. We did this because it's a good habit to initialize your pointers so they never point to unknown memory locations.

The indirection or dereferencing operator, *, accesses the value of what its operand points to. For example, if myPtr points to variable y, *myPtr returns the value stored in y.

The * operator can be used to assign a value to a location in memory:

You can think of the indirection/dereferencing operator as meaning, “the_thing_at_the_end_of_”, as in:

The * and & operators complement each other. In other words, the following expressions will all evaluate as true:

The example below demonstrates the use pointers, including address and dereferencing operators.

This seems to be true for both little-endian and big-endian systems, but I need a decent reference on this to say this with certainty.
cplusplus/pointers_1.txt · Last modified: 2019/03/28 16:24 by mithat